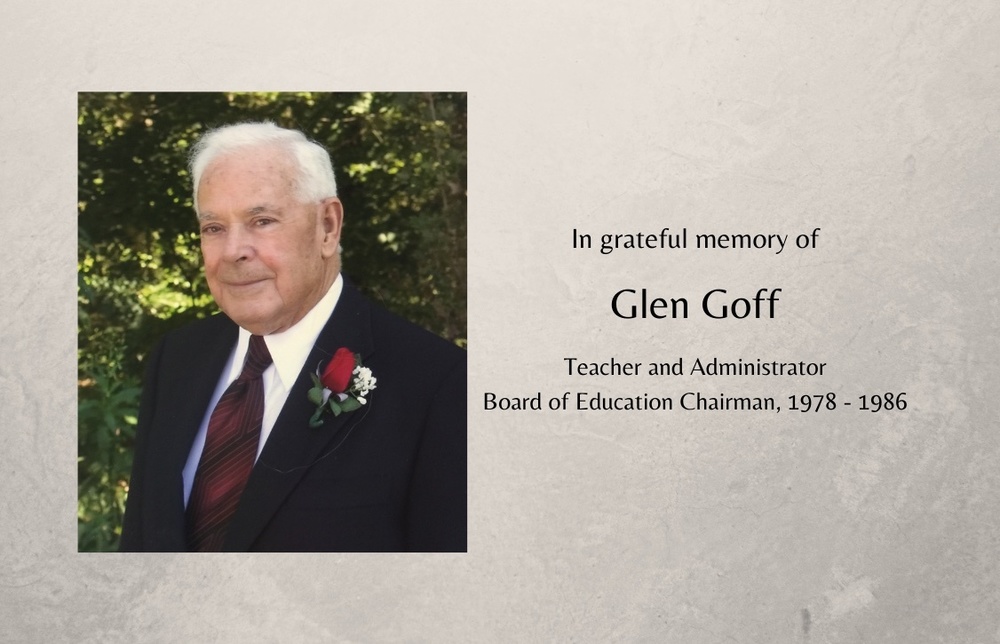 Board Pays Tribute to Former Chair; Mentor to Many

Grayson County Schools and our community lost a leader and a mentor with the recent passing of Glen Goff. As a teacher, an administrator, and later as Board Chair, he played a meaningful role in Grayson County education, a legacy continued by his family.

His values drove his service, leaving a positive impact on those who knew and served after him. The high standards he set for himself, make us want to strive for our very best.

The current members of the Grayson County Board of Education are privileged to call him one of our own, as we pay tribute to his many accomplishments and contributions – in the military, in education, in business, and in the lives of so many through the years. A true servant leader, he leaves a legacy that will continue to influence and grow.

The Purple Flash alum graduated from Caneyville High School at the age of 16, before serving his country. A proud veteran of WWII he enlisted in the Merchant Marines before joining the U.S. Army in 1946 at the age of 17. He trained at Sheepshead in New York and was a surveyor at Guadalcanal in the Solomon Islands. Upon his discharge, Goff earned a B.S. degree from Western Kentucky University.

He taught at the one-room Goff School before moving into the countywide role of Director of Pupil Attendance Personnel. He returned to his education roots from 1978-1986 as a member and as Chairman of the Grayson County School Board.

Goff branched out into the business sector in 1957 as he became owner of the Caneyville IGA. He opened the Leitchfield Glen’s IGA in September 1960, which he operated until1992.

One of the life experiences he was most proud of was mentoring the high school students who came to work for him there. Many of them went on to serve the public and many are very accomplished adults.  Examples include former Grayson County Schools Superintendent Teddy White, Clarkson Principal Shannon Cates, and of course, son Carl who worked alongside his father every day from high school until the store was sold in 1992.

Goff’s passion for teaching and mentoring was shared by his wife Jo Nell Acton Goff, who taught Home Economics at Caneyville and briefly at GCHS. She also served as Food Services director for five years prior to her retirement.

Daughter Glenda taught Health and PE at Caneyville before moving to Grayson County High School to teach both health and PE. She taught for more than 33 years, retiring in 2009.  She continues her education journey as a member and past president of the Grayson County Retired Teachers Association, remaining active on the district and state levels, as well.

In other business and community roles, Goff served two terms as Senator on the Wetterau Board for IGA. He was also instrumental in bringing Grayson Manor Nursing Home to the county and was Chairman of the Board in 1962. He was a member of the Masonic Lodge and Leitchfield First Baptist Church.

An educator has the opportunity every day to change a life. Glen Goff took advantage of that opportunity every day. We were privileged to have him serve our community as a Board of Education member, as a business owner and job creator, as a mentor to many, as a friend. Thanks for the memories, Glen.