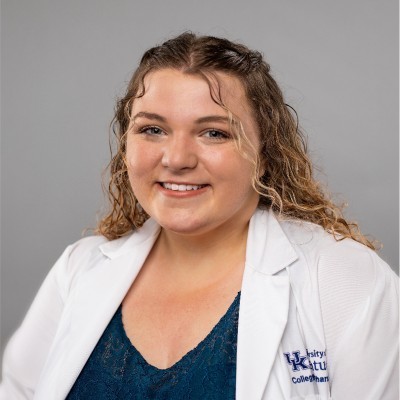 Lindsey wrote the articles during her time studying with Dr. Joseph L. Fink III in an Independent Problems in Pharmacy course. The articles highlighted the different roles a pharmacist can play in the community and with their patients.

Lindsey is studying to become a pharmacist at the University of Kentucky. She states, “I participated in chemistry research my senior year of Gatton, under mentor Dr. Kevin Williams, synthesizing analogs of Carboplatin compounds, an anti-cancer drug. While I loved working in the lab and using the NMR, I was also very interested in the pharmacology of the compounds and how they work. When telling this to my mentor, he suggested I look into pharmacy. At that point, UK Pharmacy School was the dream for me. I knew applying less than one semester after officially graduating high school was a longshot but felt Gatton had prepared me for the challenge and rigor. To my surprise, I was conditionally accepted into UK College of Pharmacy, PharmD Class of 2023 in October 2018.”

“My personal favorite outcome of Gatton was meeting Dillon Tate. My Computational Problem-Solving partner (a required course for all Gatton students which teaches how to code in Mathematica, problem-solving skills, and algorithmic thinking) is now my fiancé, and we plan on getting married this May.”

About The Gatton Academy: Established in 2007, The Gatton Academy is Kentucky’s first residential two-year program for gifted and talented junior and seniors. The Gatton Academy’s students enroll as juniors and are full-time Western Kentucky University students pursuing their interests in advanced science, technology, engineering, and mathematics. The Gatton Academy has been named to Jay Mathews’ list of top-performing schools with elite students for 11 consecutive appearances and received the National Consortium for Secondary STEM School’s Innovation Partnership Award.